Where The Wind Blows

The wind picked up speed, howling its way through the trees. The crunch of the rustling leaves pulled Melvin out of his slumber. He shook himself awake, jumped to his feet and braced for action. This was the moment he’d been waiting for.

Melvin raced to the edge of a branch on the Redwood tree he called home. He checked his footing carefully, hoping not to repeat yesterday’s mistake, which left a reminder of soreness on his little behind. The wind was blowing hard, and he struggled to stay steady. He took a deep breath, spread his wings, and leapt off the branch. He swooped downward, rapidly gaining speed. “Come on!” he screamed in a desperate plea to the wind.

Just as he was about to hit the ground, he felt an invisible thrust blowing from beneath him. It was powerful yet gentle, like the hand of God. Melvin had caught the wind. He surfed along and soared into the sky, filled with overwhelming joy and exhausted relief.

The wind began to fade as quickly as it came. Melvin knew his short adventure was about to come to an end. Unlike his fellow birds, he couldn’t fly without the wind. For Melvin, every flight was a leap of faith. He needed to act fast; there was little time to find a place to land before the wind would move on. He spotted a tree in the distance and headed straight for it. 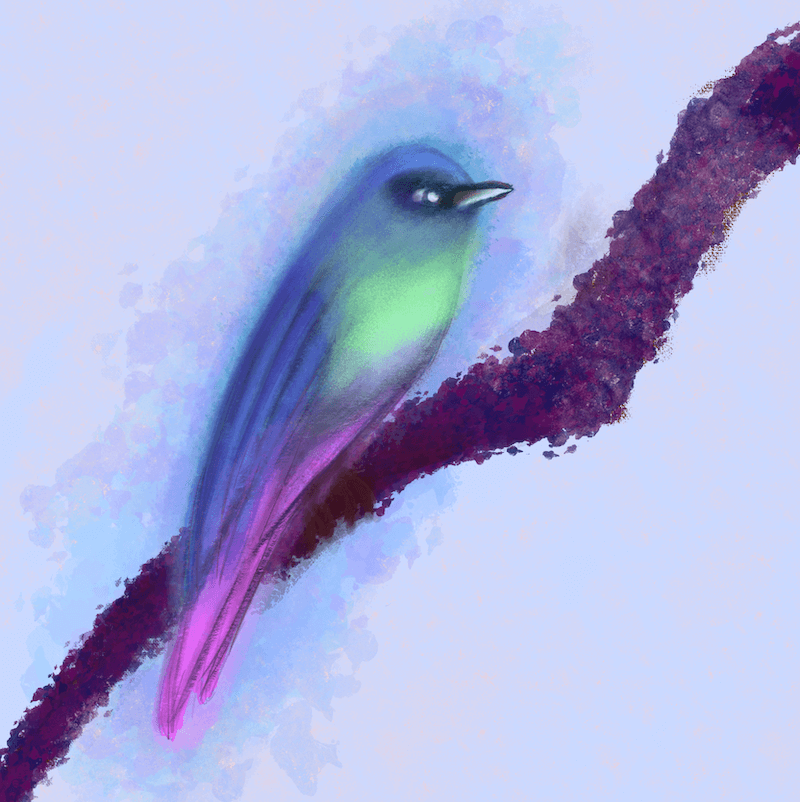 The wind exhaled its last gasps. The air became still. Melvin would wait there until sunset, when the wind would return in the opposite direction. He would ride it back to his nest to sleep, before waking up to do it all over again. Melvin lived his whole life floating between the trees.

Melvin never flew with his fellow birds. He hung onto his flock like a dangling thread on a sweater. For his own safety, Melvin was told to stay within the windy valley that cradled his home. Beyond the valley was a beach, where Melvin’s fellow birds spent their day hunting, playing, living. But the beach was off limits for Melvin. It was too dangerous, he was told. The winds were always shifting, and Melvin could get caught stranded out at sea.

Throughout his life, many wise birds had tried to teach Melvin to fly. They tried to teach him the same way they taught every bird — they’d bellow a single instruction: “Fly!”, and shove them off a tree branch. When the little bird was falling to the ground, their instincts would kick in, and they’d flap their way to safety. The students never liked this method, but the teachers weren’t bothered with how the students felt. In the end, the method worked. Every bird learned to fly.

Except for Melvin. When he was shoved, he’d fall straight to the ground, and add another injury to his long list. His teachers grew frustrated with his lack of progress. They didn’t know what to do with him. One by one, they all gave up on Melvin. So, he gave up on himself. He resigned to his fate, feeling trapped like a prisoner in his own home.

One morning, as Melvin’s flock was headed for the beach, a group of his fellow birds approached him. “Staying home again, are we Melvin?” teased the self-appointed leader of the group.

“Ah, yes! The bird that can’t fly. This joke never gets old…” The snickering bird let out a boisterous chirp, before glaring at his friends in a clear command to follow suit. The other birds got the message, and quickly joined him to form an orchestra of flapping beaks.

Once the giggling birds had their fill, they took off for the beach, leaving a sulking Melvin alone on his branch. On the verge of tears, he whispered to himself, “Enough is enough.” Wind or no wind, Melvin told himself, he would fly over the sea today.

He marched his way down the coast, away from the judging eyes of his flock. He felt the strong winds tugging him toward the beach, like an excited child pulling their friend to the playground. A tall tree near the water called out to Melvin, and he climbed it. He stared at the ocean, startled by the power of the crashing waves before him.

He knew he had no time to waste; he had to make the most of the wind. He took a deep breath, leapt into the air. The wind was strong and carried him with ease. He closed his eyes and inhaled the misty air, savoring every last drop. For a moment, he felt like a free bird.

Melvin opened his eyes and was alarmed to see how far he had gone into the sea. He searched around for a place to land, but was surrounded by water. The wind kept carrying him further and further into the ocean. He felt helpless, like a skier racing out of control down an icy slope. He knew he had to stop himself. He thought of crashing into the waters and swimming home. He couldn’t remember the last time he swam, let alone at such a great distance. He had no choice.

He swooped down into the water and tried to swim. Every time he kicked himself forward, a wave would push him right back. The waves grew bigger, pushing Melvin further. A massive wave came towering toward him, and all he could do was watch. The wave crashed over him, plunging him into the depths of the sea.

Underwater and struggling to breathe, Melvin tried to kick himself back up. He could see the shimmering rays of light from the surface, drifting further and further out of reach. Melvin thought of the warmth and safety of his nest. He wondered if he’d ever see home again.

Suddenly, he felt something sharp grab him by the neck and lift him upward. He was out of the water in a flash. Melvin couldn’t see what had grabbed him, but resigned to let fate take him where it may.

When Melvin opened his eyes, he felt the pinch of sharp rocks beneath him. He was startled by the creature that stood before him. It was the largest bird he’d ever seen. The bird was thrice Melvin’s size, had a sharp blade for a beak, and wings that stood as tall as a tree.

The bird tilted his head and looked at Melvin curiously. “Oh? And why is that?”

“Well—cough—it’s not safe. Especially for a bird like me. Could you please carry me back home? I live near the beach over there.”

“You can carry yourself home.”

“All birds can fly.”

“Except me. Whenever my teachers shove me, I fall down.”

“During a flying lesson, I mean. That’s how birds learn to fly — they are shoved by their teachers.”

“It isn’t? It seems to work for every other bird. I wish I could do it too… but I just can’t. There’s something wrong with me.”

“There is nothing wrong with you. Every bird is different. I, for one, never learned by being shoved. I don’t fly by the command of others — I fly for myself. Perhaps you too need to learn to fly on your own.”

“On my own? But how can I learn without a teacher?”

The elder bird fell silent, and looked at Melvin with curious eyes.

“Why do you want to fly, little one?”

“Well… I guess I don’t want my teachers to think I’m a failure. I want to show my fellow birds I can fly. That way, they’ll finally stop teasing me. I want to prove them all wrong!”

“And that is why you cannot fly.”

“You’re trying to fly for others, not for yourself! You carry them around with you, like a heavy weight dragging you down. If you want to fly, you must let them go.”

“Focus on why you want to fly. That is the only guide you need. Good luck, little one!”

The elder bird took off in a flash. “Wait!” Melvin watched in horror as the elder bird flew away, leaving him alone on the rocks. He had hoped the elder bird would teach him, but instead he found himself abandoned once again.

The sun was setting, and the tides were rising. Melvin realized the rocks he stood on would soon be underwater. He had no choice but to try and fly — his life depended on it.

He started with a flutter, then flapped with fury. He flapped and flapped until his energy was sapped. It seemed hopeless, until he noticed himself lifting off the ground. It was only a few inches, but to Melvin it felt like a mile. “I’m doing it!”

He sighted a rock in the distance, and decided to make it his target. He flew himself halfway to the other rock before falling, and slowly swam his way back to try again.

Soon, he was moving between rocks with ease. He swooped up and down and danced in the air. He sensed his confidence growing — he rode its momentum to fly higher than ever before. He flew with abandon. He was a bird anew.

Melvin caught a familiar sight in the distance — it was the elder bird, resting on another rock. He headed straight for it. As he landed on the rocks, Melvin was filled with conflicting emotions — anger at the elder bird for leaving him, and joy at having finally learned to fly. He didn’t know what to say, so he kept silent.

The elder bird nodded, giving Melvin a knowing look. “I was watching all along from afar, little one. I knew you could do it! I just had to get out of your way…” The elder bird couldn’t hide his joy, smiling at Melvin ear to ear.

The elder bird’s expression grew somber, as though he remembered a painful memory.

“You are a free bird now, little one. But you have a much greater challenge ahead of you.”

“An even greater challenge? What could be harder than fighting the winds and the waves?”

Melvin fell silent, considering the elder bird’s words. He looked behind him, to the distant beach that he called home. He looked ahead, to the endless horizon and all its hidden lands waiting to be explored.

He flapped his wings, and took his first flight as a free bird.