In the summer of 2022, I was a mentor in the Write of Passage online course, and I decided to share my three biggest inspiration with students: Alan Watts, Liz Gilbert, Antoine de Saint-Exupéry. 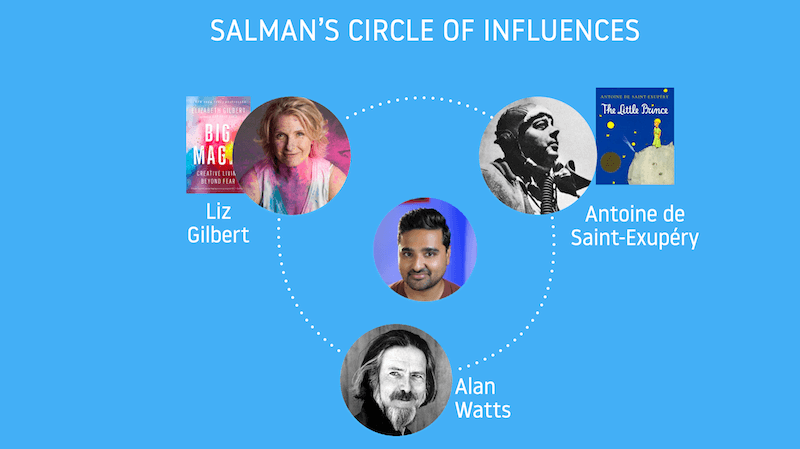 This page is a tribute to some of the people whose creative work, ideas and philosophies have influenced me the most. I plan to keep this page updated over time.

There’s so much I want to say about all the folks in this list, but for the sake of brevity I’ll limit myself to a brief note and a few suggested links.

Alan Watts’ philosophy and ideas have had an incredible impact on my life. He’s changed my lens on life. His lectures and books are profoundly valuable resources for the world.

I’ve published a dedicated page on Alan Watts in my public notebook to track my favorite resources from Alan Watts such as his rendition of my favorite fable, and his lecture on how overthinking can kill your reality.

Most importantly, I want to share this book: Talking Zen. I just finished reading it, and found it to be an excellent introduction to Watts’ ideas. It’s broken into digestible chapters, exploring a great selection of lectures he delivered throughout his life. (FYI: I’ve been keeping bulleted notes as I’ve read the book, and plan to share them soon. If you’d like to take a look at the rough notes, shoot me an email.)

Gilbert’s ideas on creativity and her focus on empathy and self-compassion has really changed the way I think about creative work. Her book, Big Magic, is the best book on creativity I’ve read. I often come back to her words and wisdom whenever I encounter creative blocks.

In my essay, Why Bother?, I wrote about how Gilbert’s wisdom showed me the power of working in public, and the pain of keeping our passions silent. I also recommend her interviews with Chase Jarvis and Tim Ferris.

I am forever grateful to Saint-Exupéry for writing my favorite book of all time, The Little Prince. It taught me to embrace the wisdom of childhood playfluness as an adult, and it inspired me to write my book of fables.

I hope to write more in detail about the book someday, but for now I’ll just say this: The Little Prince inspired me to be who I am today.

The book was adapted into an animated film. It’s wonderful, too. Campbell’s writings and lectures offered a timely introduction to the world of mythology, and its role in our own personal transformation. In his book, Pathways to Bliss, as well as his PBS interview series Power of Myth, he shares the incredible role that stories play in our societies.

His perspective has helped me understand the importance of mythology for the individual and the community. It has galvanized my work in writing fables, and given me more clarity in their potential to serve the world.

I am a huge fan of Sivers, most of all for his book Hell Yeah or No. His ideas are powerful, and his writing is concise and relatable.

He’s an inspiration not just for his message, but his medium—he writes short blog posts, gets feedback, and then publishes books with the best of his wisdom. I also really appreciate how his books are printed, with beautiful typography and cover textures that feel satisfying to the touch. There is much about his approach to work that I want to emulate.

I’m slowly working through all his books. I say ‘slowly’ because books that really impact me take time for me to read. I like to savor them. I’ve read Hell Yeah or No twice now, and hope to publish more of my takeaways from it. For now though, I’ve shared a note with some thoughts from my favorite chapter in the book, “The public you is not you.”

Miyazaki is a master storyteller, animator, and director. He’s the founder of Studio Ghibli, whose films I have loved since I was a child. Nausicaa and Spirited Away are my favorites. As I’ve grown up, I’ve come to appreciate him more for his approach to creativity behind the scenes. I admire his sheer dedication, and relate to his frank atittude to the struggles and painful experience of making things you love. The HBO documentary Never-Ending Man does a great job of capturing it.

Peter is an incredibly talented illustrator and character designer. His career is hard to summarize, so I won’t try. Instead I’ll just say that I love his characters, and his love for characters. In my illustration work, character design has become the thing I’m most drawn to, and he’s a huge inspiration.

I particularly enjoy his published sketchbook. To me, sketches are often more beautiful than the final work. The scratchy pen style he adopts is one I incorporate in my own work. I also use his pieces as practice for learning (e.g. when I redrew his sketches and added color to them.) His talk at the Normal Rockwell Museum, Inspired by the Masters, is an excellent watch to see some of his inspirations. He also speaks to his appreciation of sketches as complete art on their own, a message I deeply appreciated hearing from someone as accomplished as him. One of my favorite characters of his is Scrat, from the Ice Age animated films: