Do you remember the day you killed one of your own?

There you were, scrolling your phone, lying in a fetal position on your bed, when suddenly an idea appeared to you. You knew right away that it had to be shared, and that only you were uniquely qualified to share it. Its electric energy jolted you out of bed and onto the chair at your desk, where you began pouring its essence onto a new page, leaning so far forward in possessed concentration that you gave the hunchback of Notre Dame an identity crisis.

An hour later, you sat up—flinching at the crack of your back—and gazed at the creative newborn before you. Its sparkle reminded you of the giant star which birthed it, the idea that still wandered the galaxy of your mind. It was tiny as a speck of stardust, but it was yours. It was beautiful.

Your satisfied smile faded when you remembered what must happen next. You imagined the inevitable moment when you would dip the toes of your little creation into the vast ocean of the internet, helplessly watching its struggling strokes under the critical gaze of the world’s eye as you completed the obligatory rituals, trumpeting its arrival on the channels of social media.

Would it sink at once, dying an invisible death, mourned only in your memories?

Would it swim far enough to surpass the thrashing waves of algorithmic entry, and onto the judging jaws of trolling piranhas?

You were too terrified to find out. You hated the uncertainty, and refused to let the cruel waters drown your idea’s light. You would do the dirty deed yourself. “Better me than them,” you whispered.

When you finally let it go, the sparkle of its essence was long gone. It caused no ripple with its neutral hues, swimming unseen in the infinite ocean.

If this is your story, know you’re not alone. It is the story of thousands of writers who clip the wings of their creations before they even get a chance to fly.

Crippled by the fear of “everyone on the internet” seeing their work, they hold back and hesitate, hiding what they really want to say. The result is a wishy-washy piece that aims for everyone but connects with no one.

Not all stories have to end this way. The internet can be a scary place to share these days, but there are ways to give life to our creations without exposing them to everyone, everywhere, all at once.

There’s a middle ground to be found between screaming in silence and sharing with terror.

Instead of dumping all of our work into the ocean of public social media, we can share it in controlled environments. We can let it swim in friendly waters. There is an entire spectrum of sharing between private and public—you might call it semi-public sharing. 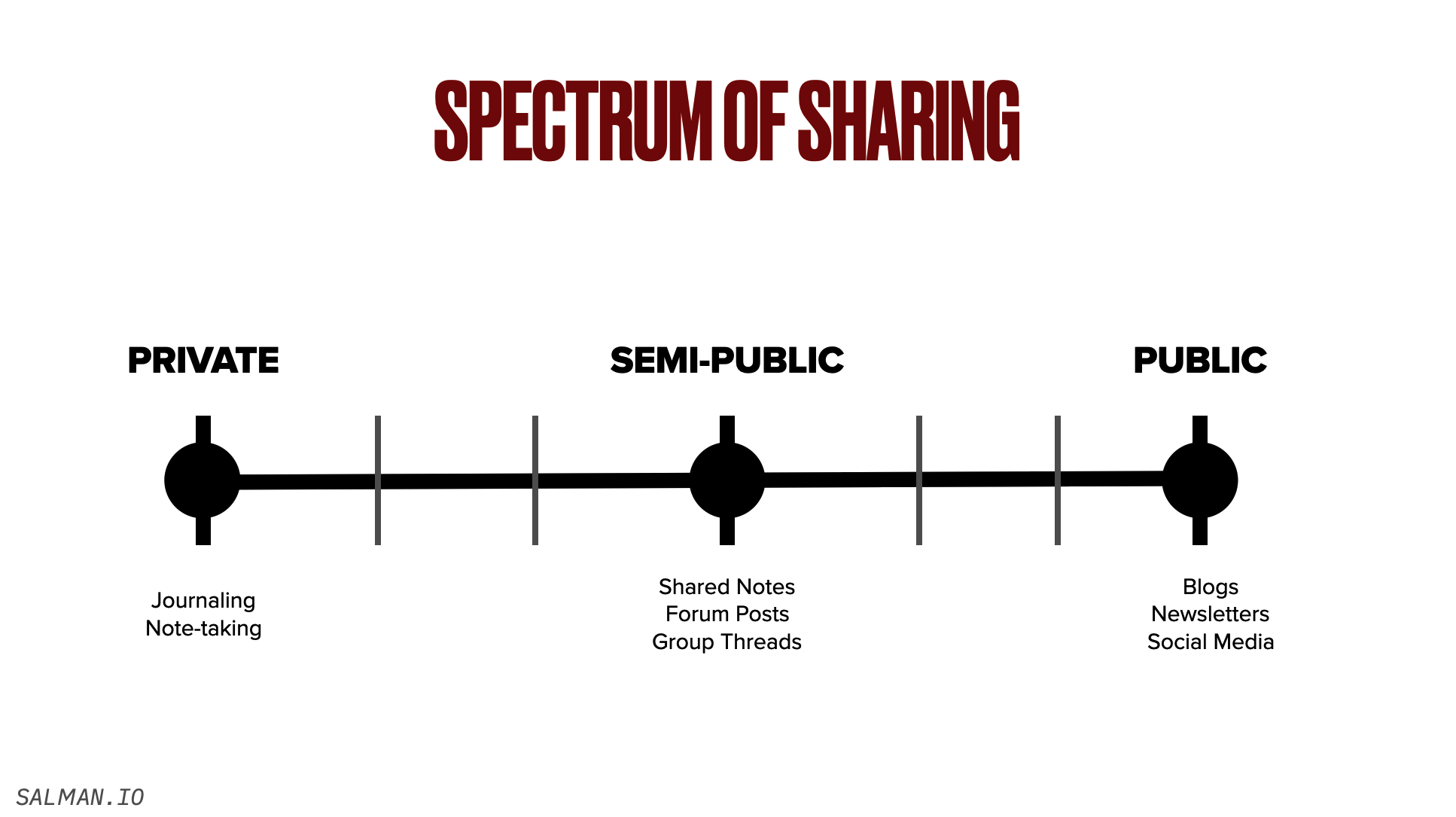 To share your work semi-publicly, start by ensuring it’s accessible with a URL. You can use your own website or tools like Google Docs or Notion to host it.

Instead of posting on social media, share links to your work freely with trusted peers through text messages, emails, DMs, and so on. You’ll get private feedback without having to face the fear of public scrutiny.

When you share with a trusted group, it elevates your willingness to express what you really want to say. By controlling visibility, you unlock vulnerability.

You might be thinking: “But it’s public now! Won’t everyone see it?” No. Given the overwhelming volume of stuff on the internet, an obscure page isn’t going to start ranking with SEO just by sharing a link with a few peers. It’s extremely difficult to rank with SEO even when you’re actively working on it—if you don’t link to it or post it anywhere, the page is effectively invisible.

It’s understandable to feel shy at first when sharing links to your own work. But remember: You put in all the time and effort to process your thoughts into a cohesive expression. When you contrast it to improvised conversation, your creative eloquence is a gift you’re giving to others. Don’t waste it!

Building a trusted community of peers is vital to sharing freely. They are the people whose feedback you really want, the people you feel safe with, the people who can truly help you grow. They’re also the people that won’t hold back—it’s not helpful when peers tell you something is good, even though they know it isn’t. You want to share the truth with them, and you want them to do the same.

It takes dedication and patience to build the right group, but it’s worth the effort. There are two major components to a building great peer group, both equally important: making friends and building squads.

Friends — In my recent essay, Friends over Followers, I explored how to use online writing as a vehicle for attracting friends: “With every word, every tweet, and every essay, we send a signal to others about what matters to us, what’s meaningful to us, and how we’d like to connect.” It’s not just about improving your work, it’s about using your work as a beacon to attract the people you want to know. We write to share our ideas, but the real reward is often the friends we make along the way.

Squads — It’s incredibly fulfilling to have your work seen by those who you respect. When you create a circle of mutual respect with others, you can form a powerful squad that yields compounding benefits for all who contribute to it. Sam Hart, Toby Shorin, and Laura Lotti wrote about the benefits of Squad Wealth, noting that squads can create “opportunities and group resiliency that would have been impossible to achieve alone.”

The best way to share is organically, in conversation with others. This means you’re adding to the conversation, unlike in social media, where you are trying to supplant the chaotic stream-driven conversations with whatever you happened to just create.

With large audience visibility, the climb of vulnerability is often too steep, so writers fall victim to the common story of creative self-censorship. With a smaller and focused audience, you can leap farther in the path of vulnerability. 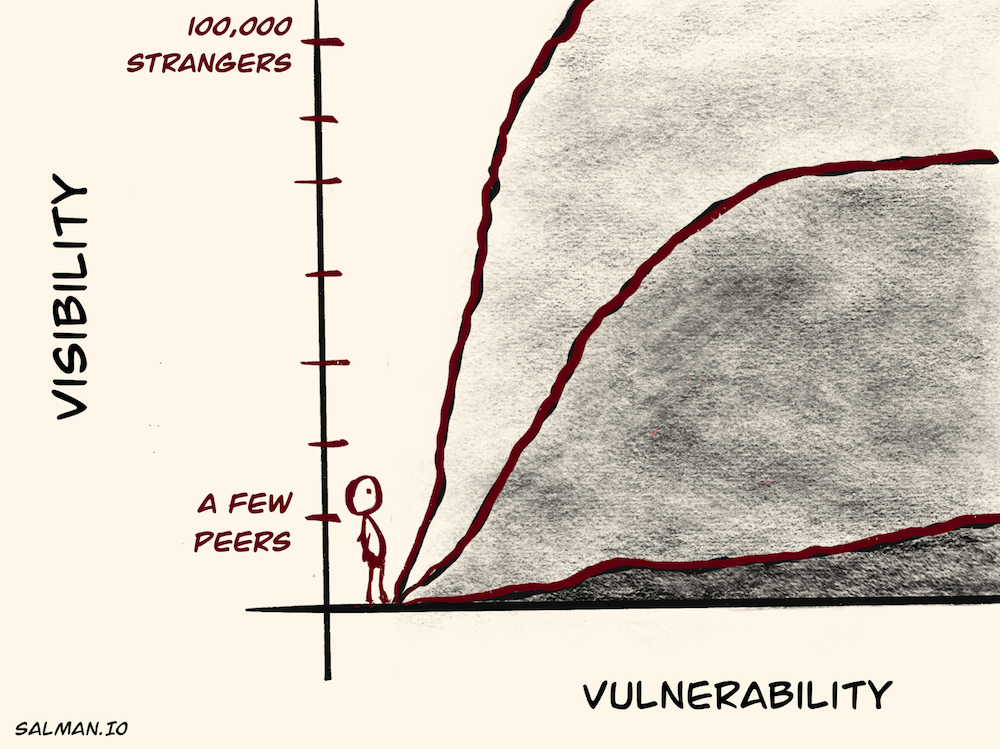 There are many cases where semi-public sharing has helped me get a very rough, unpolished idea out into the world. One instance came through a question I often get: “Should I post on a blog, or a newsletter?” It’s a good question with a nuanced answer. I would always answer this question in depth over a call, DM, or group message, but I hesitated to write a full-on blog post about it. I didn’t want to alienate anyone who advocated for a specific approach.

It was just a tiny worry. Perhaps even a silly one (there are far more contentious issues than this one.) But that hint of hesitation was enough to kill my motivation to publish.

Years later, after answering the question in a forum for the umpteenth time, I decided to copy+paste my answer into a new, unlinked page in notes section on my website. It felt a bit weird to do all this just to share it with a single person—but I knew it would likely come up again. It was rough, unpolished, and exactly the kind of thing I would never share in a blog or newsletter. The post remains in the same state to this day (you can read it here: Blog vs Newsletter), but people find value in it every time I share it.

I realized I can share ideas even when I’m unsure of them. I don’t always have to have all the answers.

Another example comes from my friend Michael Dean, who maintains a Notion log of his thoughts. Like my notes, his log is separate from his essays and other public-focused writing. His log is a journal that he uses to capture and archive his thoughts throughout the day. Every now and then, he might share an entry with a peer. Because the log has very low visibility, he’s able to be that much more vulnerable in each post.

Being vulnerable doesn’t require sharing your deepest, darkest secrets—it can simply be sharing things you hesitate to share. When you engage with those you trust, you discover the courage to say what you really mean. You show up as yourself, so you feel seen. And others feel seen through you.

Reduce visibility to elevate vulnerability. By lowering the stakes, you can liberate your strongest takes.

I’ll leave you with a question to ask yourself which might help surface the ideas that lie in wait:

“What do you keep saying privately that you could start sharing semi-publicly?”