Do you remember the freedom of childhood play? You tasted every object, crossed every line, pushed every envelope. You did it without hesitation. The world was your playground.

As you grew up, you were taught to respect the rules. You stopped frolicking and started following. You were told that rewards were waiting for you, as long as you stayed in your lane. After all, you’d come so far on the current path. Why would you throw all of that away? You couldn’t think of an answer, so you just kept going.

One day, you hit a bump in the road. Or two. Or three. You wondered if it was time to alter your course, to veer off the path, to try something new. The curious cat in you daydreamed about what lied in the forest beyond the trail. The questions rumbled in your mind, echoing and building into a cacophony that couldn’t be silenced.

But change is scary, so you did nothing. You resisted and rationalized, deluded and delayed.

Finally, after years of internal struggle and endless overthinking, you mustered the courage to make a change. You took a tiny step towards a new beginning.

And that’s when you ran into the status police.

Status police wander our communities, waiting for opportunities to perform an intervention. The minute you try to step out of your assigned box, they show up out of thin air, and not-so-gently nudge you back into it. They serve as a constant reminder of your position and place, and how important it is (to them) that you stay directly in it. 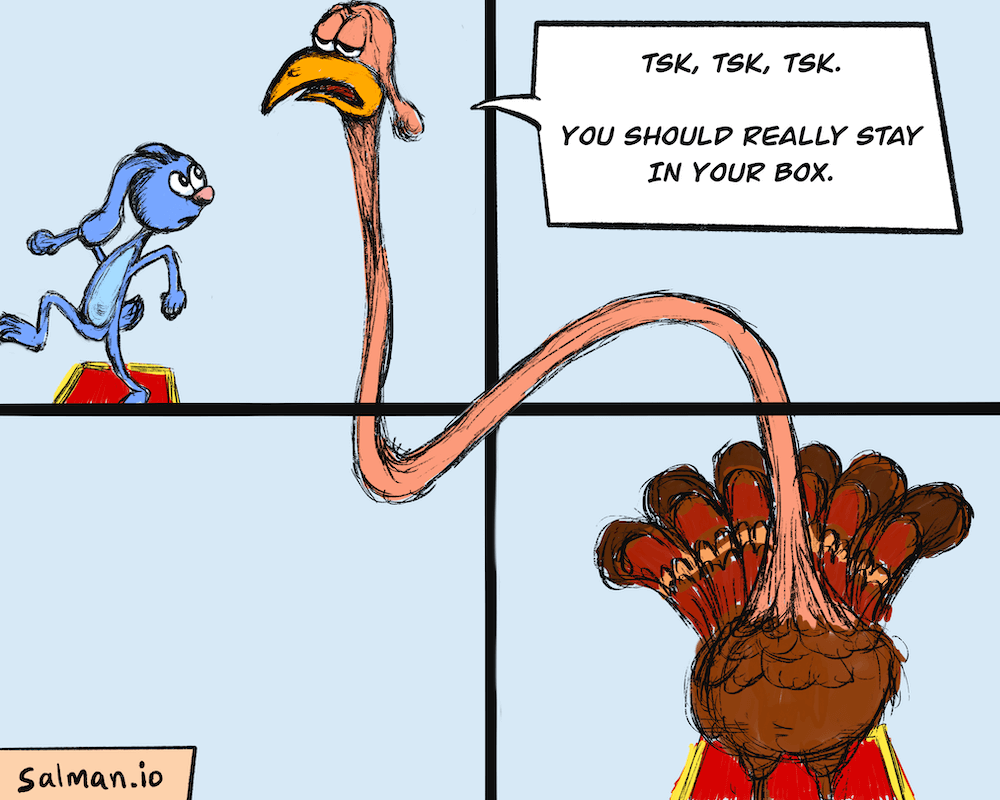 The status police are a force among us that no one hired, let alone desired.

Consider, for a moment, the cost of status enforcement. What do you lose when you stand still? The answer is (almost) everything. You preserve your present self, but kill all but one of your potential futures. You deny yourself even a taste or tease of all that you could become.

Like the freezing curse of a wicked witch, the words of status police can turn people into prisoners. In South Asian culture, the tyranny of status police runs rampant. This phenomenon is known as Log Kya Kahenge, which translates to “What will people say?” Log Kya Kahenge is often used as a tool by parents to enforce their children’s behavior, in search of approval of the opinions of others in the community. Out of fear of the status police patrolling outside the home, parents turn into enforcers inside the home.

You might be wondering: Why do people become status police? Why can’t they simply live and let live?

If you explored their motivations and incentives, you might discover that they are threatened by you. Without saying a word, your mere appearance tells a tale of growth. Seeing you forces them to reconcile the questions and desires that already plague them. As you know, change is scary. People tend to resist it. In order to avoid the hard work of changing themselves, they try to prevent you from changing instead.

Regardless, you can’t afford to spend your life investigating the motives behind every person that tries to regulate you. Just like it takes energy to police others people’s lives, it takes significant energy to worry about the others who try to police you.

So how do you stop worrying about what others think?

In a prior essay, I wrote about the book Courage to be Disliked, which explores the ideas found in Adlerian psychology. Adler’s teachings offer a powerful framework to stop worrying about the approval of others: separation of tasks. The idea is that you need to go through an exercise of separating which tasks you truly own, versus ones that are in the control of others. Keep the tasks that are truly yours, and forget the rest.

It is not your task to determine whether or not other people like you. That is their task. If they try to enforce the rules of their approval upon you, it’s an effort to transfer their task onto you. Don’t let it happen. When you take on the tasks of others, they dictate your life.

“Half of life is lost in charming others. The other half is lost in going through anxieties caused by others.

Leave this play. You have played enough.” —Rumi

Resisting the enforcers is no easy task. They are often quite good at what they do — persuasion and manipulation are among the many powerful tools they wield with abandon. Even if they’re not physically present in your life, their words can still haunt you. They live on as ghosts in your mind, questioning and doubting you wherever you go.

In those moments, you must remind yourself that you are not defined by your thoughts.

Thoughts are nothing more than suggestions, chosen by an algorithm in your brain, trained on the harsh environments of your life. You can dismiss these suggestions. You can choose to let the words, thoughts and ghosts of status police pass you by. You can curate your life’s environment.

When you empower yourself, you disarm the status police.

Find a way to instill belief in yourself at the root of your being. Plant these seeds of self-belief, and tend to them with care. Your harsh environment will throw many storms and droughts upon your budding garden, but you must protect it at all costs. If you do, you might finally be able to live within the gardens of your inner growth.

Take a moment to imagine your inner garden…

Do you hear the orchestra of birds singing with abandon? Or the gentle gusts sweeping the leaves?

Do you see the towering trees swaying with sunlight? Or the blooming flowers waiting to shine?

Do you feel the soft dirt massaging your feet? Or the fresh air filling your lungs?

You deserve to live in the garden of your dreams.

Your life is yours to live. Don’t let others live it for you.